The “Worst Storm Ever”…. again.

So…. Hurricane Harvey and the “Disaster in Houston”…..

I’m gonna nip this in the bud before we get the deluge of “OHMAGERD THIS IS THE WORST STORM EVER! TRUMP’S FAULT! GLOBAL WARMING! *AUDIBLE SCREECHING!*”

Let’s get it right out on the table now.

Two things should put this silliness to rest.

First, there is NO increase in hurricanes.

In fact, there is a DROP in the average number of hurricanes per year. 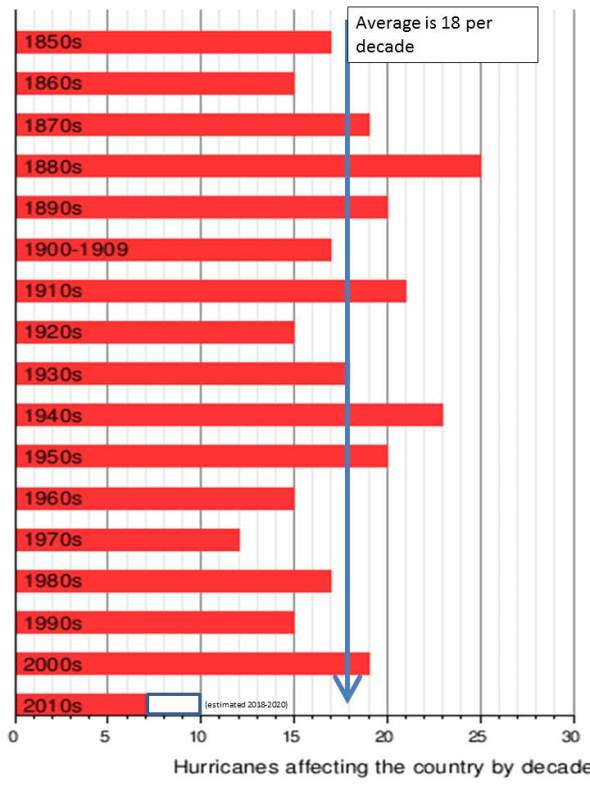 We are at SEVEN hurricanes. To even reach the AVERAGE number for this decade, we’d have to have 11 major hurricanes make landfall in the next three years. As far as we have records for, that has never happened.

We are currently at about a 1 per year rate.

The average is about 1.8 per year.

You can do the math.

Second, no they aren’t “worse” now.

The hurricanes vary in strength, but are about the same on average. Some are big, some are small. All of them are the same exact thing they were over 100 years ago. They are huge masses of wind and rain.

There are more people.

We live closer to the water.

That is what is causing the problems, not the hurricanes which are doing the same thing they have always done.

Take New Orleans for example.The first hurricane recorded there was in 1722, when there were just a few hundred French settlers there. That storm lasted 15 hours, destroyed 36 huts, the hospital and sank ships in harbor.

The destruction of most of your houses is bad!

Was it global warming that caused that?

And where was the loss of life from flooding?

The first parts of New Orleans were built on hills NEAR the water, but not ON the water. Those high areas don’t flood. The winds knocked houses down, but many of the people survived by seeking shelter in sturdier structures. There was no flooding because they didn’t insist on “beachfront property.”

Much of the current New Orleans is 6 feet under sea level. The city couldn’t exist without massive pumps constantly running. So, even on a “normal” day they are struggling to pretend they aren’t already under water.

The same is true to a lesser extent in Houston.Much of the city is very low, and the high ground channels excess water into the lower areas. The city floods regularly even when it’s not a hurricane that is doing something UNUSUAL like sitting still for 2-3 days.

Houston is on track to get more water (50 inches) in this period than it does ALL YEAR (49 inches.)  Think about that one.The hurricane isn’t bigger or stronger, it’s just lingering and dropping a lot of rain. That’s why you’re not hearing about a ton of damage from wind…mostly from rain.

Let’s take this in perspective.

The Galveston Hurricane of 1900 was about the same size, near the same area. In fact Galveston is just a few miles away from Houston on the gulf. It is being hit this time too. However, this time there isn’t up to 12,000 dead.

Instead of harping on what is NOT happening, and what it’s NOT…. how about we focus on the good story here? We aren’t losing THOUSANDS of people dead from hurricanes all the time. We are building structures better. We are forecasting weather better. We are evacuating. We have better communications.

I agree it’ll be expensive to clean up. Then again, we aren’t living in huts on a hill that we can throw back up in one day. I guess that’s one way of avoiding the cost of rebuilding.

My brother was in Guam for the typhoons over there. He said for them it’s no big deal being in a hurricane. People die yeah, but rebuilding is real simple. Their huts are just corrugated tin and palm branches so they just stand everything back up and move back in.

Don’t fall for the hype.This isn’t the “worst ever.” It’s not “global warming.” And we will be fine.

Some say it’s God “punishing us.” I prefer to think he’s testing us as he does every day just to see how we do. From what I’ve seen there’s been very little looting and crime (unlike say New Orleans) and neighbors have been helping one another out. The shelters are reporting “tens of thousands” of survivors in shelters. The authorities at a press conference today bragged about assisting “several hundred.”

So who do you think helped all the rest?

One thought on “The “Worst Storm Ever”…. again.”