ESPN Dumbs it Down for its Shrinking Audience

“It’s a shame that this is even a topic of conversation and we regret that who calls play by play for a football game has become an issue,” ESPN said in its statement.

This is a thing?

What kind of sad condition is our country in when you can’t tell the difference between truth and satire. The whole POINT of humor is that it’s supposed to be ridiculous to the point that you won’t mistake it for truth.

And yet… we have ESPN going FURTHER than any satire site in doing something so ridiculously insulting insane and insulting that you have to wonder on who their target audience is.

Let’s leave aside the whole issue of him being ASIAN for the moment.

Suppose he were a white guy named Robert Lee.

Is their audience so DUMB and VIOLENT that they will immediately start rioting based on an announcer’s last name? They sure do have a LOW opinion of their own audience.

Then again, they are the people that backed Colin Kaepernick and have been cutting their own throat by accusing the NFL of just wanting to “knowingly kill players with concussions.”

Hey, they are a private company. They can do whatever they want. However, they can only do it for so long.

Apparently “making a statement” is more important than staying in business. They’ve seen ratings decline by about 10% a year for several years now. They are slashing jobs and promotions.

You’ll hear it’s because cable TV is on the decline, and ESPN is part of most cable TV bundles. Perhaps. However, there are OTHER ways to get sports coverage and the websites of ESPN are going down. Meanwhile, those of other less political sports coverage (FOX Sports for example) aren’t doing nearly so badly.

While doing some research, I found this chart interesting.

I don’t entirely agree with some of this (monster truck fans and WWE are left wing?)

However, the point is made. There are a LOT of fans out there who are “right wing” and are active in sports AND politics. College football fans skew strongly white and conservative, with higher than normal voter turnout rates, so they are apt to CARE if you are pushing a “leftist” message.

On the other hand, the few people who ESPN is catering to often don’t watch sports and/or don’t care enough about politics to care either way.

This isn’t limited to ESPN.

NFL viewers are down. 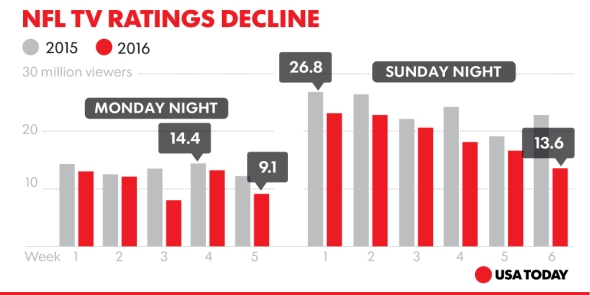 “But yeah ALL sports are down!” 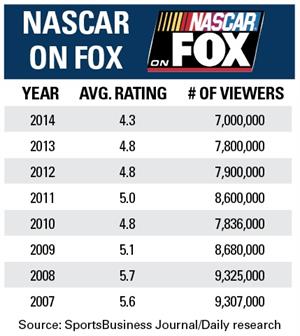 Apparently not. NASCAR viewership is up since it got AWAY from ESPN in 2013.

It seems that people want to watch sports when it’s JUST SPORTS and takes time to respect its audience.

So that brings back the question… who DOES like this new programming on ESPN?

Turns out NBA fans are… okay with it. Compared to other fans, NBA fans seem to be one of two groups who are NOT seeing falling viewership. (The other seems to be Soccer fans)

Everywhere else they are hemmorhaging fans.

Now, ESPN vehemently denies this. They even conducted their own “research group” to try to disprove this. The problem is that they only poll EXISTING SUBSCRIBERS. So, the people LEAVING are never asked why they left. The people staying are the ones who obviously LIKE it. Otherwise they’d leave wouldn’t they?

It’s disingenuous at the very least to only poll people who LIKE your product. While that’s the easy route to take, and it’ll make you feel good, it’s a very bad idea.

You have to reach out to people who DISLIKE service, since those are the ones that you LOST. There’s a helluva lot of disgruntled folks if you are losing that much viewership. Just saying “No, everyone loves us” is just whistling past the graveyard.

Free Speech 101 – A Tutorial for Nancy Pelosi »
« Couch on Blocks