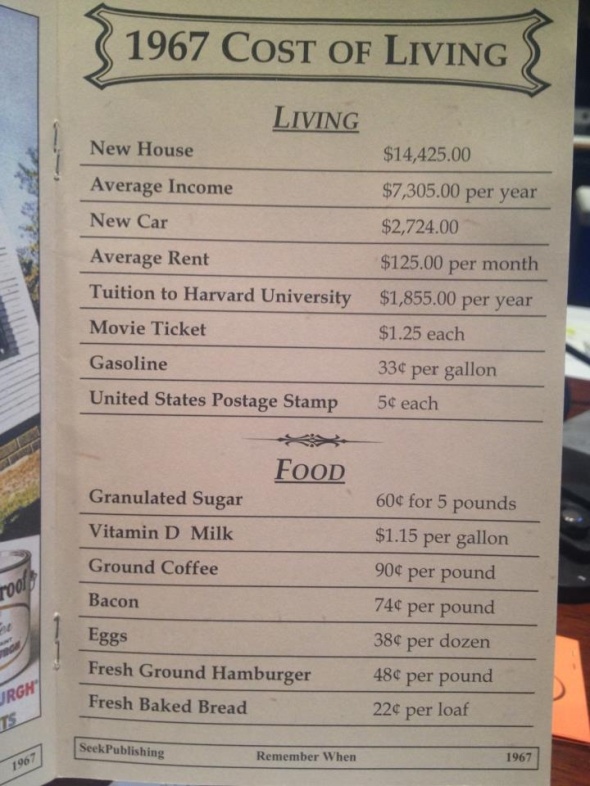 So, being a statistics nerd I figured I’d see how much that would be in today’s dollars. 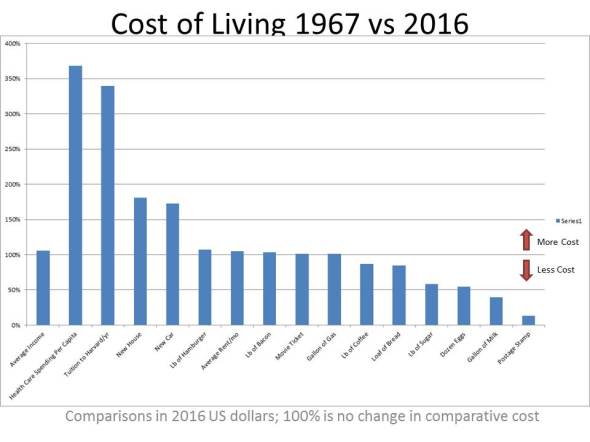 Wow….so I guess the “cost of living” isn’t actually that high on most things. We do spend more, but we also MAKE more money. So, it kinda evens out.

Some of the items seem expensive but then again we get more today. Our houses are bigger. Our cars have anti-lock brakes, power windows, air bags and bluetooth. So, factoring that stuff in we’re actually getting about the same deal… IF those things existed back in 1967.

Speaking of not existing, you couldn’t get a cell phone. The best you could do on the go was a pay phone on the corner. Those were about 5 cents a minute (10 cents for a 2 minute call.) Today prepaid minutes are a little cheaper…but you can carry it in your pocket so it’s actually a lot easier on top of that.

Some things are far cheaper than I thought… like a gallon of milk or a a carton of eggs.The secret is that a 1967 dollar was worth about $7.14 today. A gallon of milk today at those prices would be about $8.20!

So why do we keep being told that food is so expensive? We are spending LESS of our monthly budget on food than ever before. That goes for home cooked as well as fast food. In fact, 1967 itself was a lot cheaper than 50 years BEFORE THAT.

Back in 1917, a gallon of milk was about 51 cents. That would be nearing TEN DOLLARS in today’s money. Yet all I keep hearing is how people can’t afford food…but they can somehow manage to afford new smart phones, Internet and a car…none of which really existed for most families back then.

So is it about actual cost… or about how we are spending our money? A pamphlet from 1917 I found states that a family of four can eat for a week comfortably on $7. That’s about $50 today.

Since we have seen how cheap food is now…that should be enough to eat on now. I know growing up poor we lived on LOTS of PB&J sandwiches, with Mac n Cheese and Hot Dogs. In fact, I KNOW you can because I make nutritious Army meals when on duty (har har) for less than $4.00 a head from scratch. That’s with generous portions, salad, condiments, dessert, etc.

On the other hand, some stuff is crazy expensive. Health care and education are over TRIPLE the cost. As for health care, we didn’t HAVE many of the things we have now. The people that demand cheaper health care seem to forget that we COULD have cheap, universal health care…we would just have to go back to 1967 technology.

Do the advocates for socialized medicine ever tell you that the waiting lists to SEE a doctor in England or Canada are often 6 months to a year? That they only have 1/6th the number of MRI machines? That many people “die of natural causes” waiting to see a doctor…so are conveniently eliminated from the waiting list?

Well isn’t THAT convenient…. for the bureaucrats.

As for education… well I don’t see it as costing that much more. You still have roughly the same kids per teacher. The price of a building hasn’t gone up much. The price of room and board haven’t gone up that much.

It’s almost as if the Capitalist free market works when allowed to or something… but that’s CRAZY TALK! Who would let people just voluntarily enter into exchanges of goods and services on their own? Who in their right mind would trust the average American to know what they want…and the average business to offer those customers exactly what they want to make money selling it to them?

No, we all know that if government says something it MUST be true.. Didn’t they pass the Affordable Care Act…and aren’t health care costs more affordable now?