Next Stop Libya for the Red Express

Putin: We Have Saved Syria, Now Time to Do the Same to Libya

To be fair the original source is the Russia Insider.

However, it does hit upon a trend that is not making news in the United States.

Overseas yes, but not here.

That theme is how thoroughly Putin is spanking  Obama’s rear end in foreign policy.

Look at the Obama legacy in foreign affairs. What are the major areas where Obama has tried to influence other countries?

First there is Syria. That didn’t go as planned. Russia propped them up after Obama has repeatedly tried to topple them; first with “rebels”, then with “ISIS”, and finally with US bombs.

Third, Egypt was supposed to fall at the same time as Syria. Obama backed the Muslim Brotherhood and the people of Egypt threw them BACK out saying “enough with Islamist terrorism!” They elected General Sisi into power to fight Muslim Brotherhood.

After Obama threw a tantrum and said he wouldn’t support Egypt anymore, Russia stepped in. They have been cooperating ever since. It’s not a “new” relationship as Russia has supplied Egypt with arms for years, but many were hoping that the US had pushed Russia aside as Egypt’s main ally. Not anymore!

Let’s not forget the Ukraine too. How is that going for ya Mr. Obama?

First you let Russia walk in and take the Crimea, then the resource-rich half of the country. Arguably the Russians are leaving the western part mainly because it’s just farmland they don’t need.

And now that brings us to Libya. Mr. Obama (and his surrogate of course Hillary Clinton) thought that all they had to do was kill Qaddafi and everyone would cheer in the streets and live happily ever after. Wait..what’s this? The Muslim Brotherhood and Al Qaeda took over??? *gasp!* Who would have thunk it?

Anyone with half an ounce of common sense really. Or anyone who has seen a “mob” movie. What happens when you take out the Godfather? A fight for who takes over of course! I have yet to see a mob movie NOT end in a big gunfight as they fight to be the new boss, have you?

Looks like Russia is going in to save the day AGAIN. Per the article, the Russians are buddying up with the resource-rich rebels in the eastern part and declaring their own country basically. They have a VERY good chance of pulling it off since the “government” in Tripoli is a joke.

I’m seeing a pattern here are you? Russia goes in… brings stability… takes natural resources in payment. Not a bad foreign policy. I’m not saying we need to emulate that imperialistic sort of strategy but it does work for them. Putin is nothing if not practical.

So what’s next for Russia? Well, it seems to me that in my amateurish opinion Russia is trying to fill a power vacuum we’re leaving in the region regarding organizing a “Moderate Muslim coalition vs Islamist terrorism.” In an official capacity, the countries of Egypt, Saudi Arabia, Jordan, Turkey, Kuwait and the other Gulf States have declared they are “allies against terror.” Russia is a sponsor in some capacity. This alliance is Sunni focused (against Shi’a and terrorism apparently) but the Russians seem to have found a way to support both Sunni and Shi’a while not getting in the middle of that feud…and still opposing terrorism.

That’s no mean feat. It has huge implications. Look at a map and notice there is an area of Russian influence running from Libya-Egypt-Jordan-Saudi Arabia-Oman-Iran-Syria…etc. Basically, the old Soviet dream of a “turning the Arabian Gulf into a Russian lake” is not too far off.

Additionally, if they secure the Horn of Africa (Somalia), they will de facto control a major shipping lane through the Suez Canal. China has talked about it. Russia is putting the troops on the ground and investing the money in infrastructure to do so.

How to prove this theory?

Well, I’m gonna say Yemen and Somalia are next on the list.

Yemen is in a civil war and needs someone to step in and “broker a peace.”

That secures one side of the Gulf of Aden.

Somalia still has a piracy problem.

The Russians will stop that in a few weeks with a fleet of ships and some Russian Marines.

Remember the last time the Russian Marines took out some Somali pirates? Quieted down for a long time…. this time they’d be there to stay!

That secures the south side of the Gulf of Aden.

(Yemen and Somalia were too. The Soviets had bases there.)

And of course Sudan is also in a civil war and right in the middle of Ethiopia and Somalia. Very inconvenient. They’ll have to be “saved.” 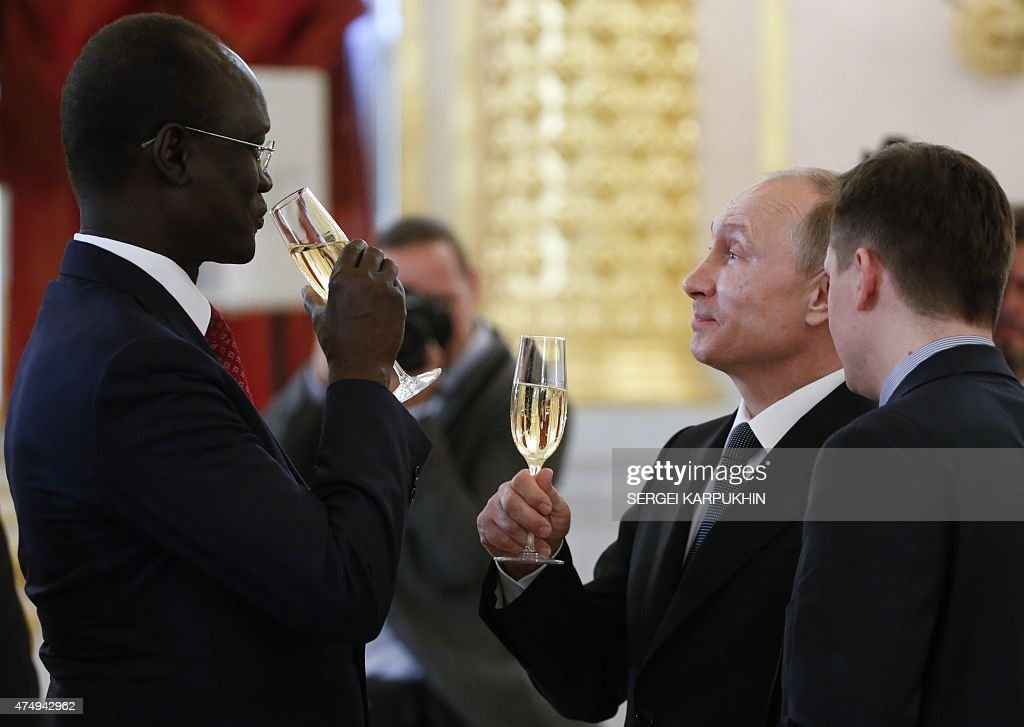 Putin talks to the South Sudan ambassador May 2015

I would bet it’ll be a Russian-backed effort organized through the Organization of African Union (AU) countries. They have personnel sitting idle, just always lack money and focus. Russia can give them a few bucks and point them in the right direction… in exchange for maybe a couple naval/air bases and a sweet deal on some of those nice mineral reserves.

Stymied all over the Middle East and Northern Africa by Russia and its Arab/Muslim allies the Islamists will have to fall back and regroup. Some yes will hide in Turkey. However, many will flee to safer areas of refuge like Pakistan and Afghanistan or deeper into Africa.

Imagine that… a huge influx of pissed off Jihadis flooding into two countries on China’s border to destabilize them. I’m sure Beijing will LOVE that; especially given China’s ongoing problem with Muslims in its Western provinces bordering Afghanistan, Pakistan and Kazakhstan. (Did I mention Putin will focus on kicking Muslims out of Kazakhstan and “Russianizing” it as they did before under previous Soviet leaders?)

That’s a whole lot of somebody else’s problems flooding into China. Well hey, they DID want to be the world’s next superpower. Big kid on the block gets into the fights.

Why would Russia do all this?

Correction why would PUTIN do all this?

Well, prestige for one. He wants to accomplish what previous leaders did not. He wants a New Soviet Union and the worldwide influence. Imagine the Cold War without the United States to stop the Russians. That’s what he wants.

On the other hand, it’s just common sense for a weak Russian economy. Any access to foreign markets only helps the Russian economy and currency backed by natural resources (commodities) is good to fight off inflation.

(Did I mention that this isn’t limited to the Middle East? While the US is trying to open up the tiny Cuban tourist market, Russia is waiting on the sidelines for Venezuela and Brazil to implode into street violence from economic mismanagement. Then he can secure very lucrative deals for oil and natural gas just like Russia did when bailing Greece out a few years ago.)

Still further, it’s a defensive move. It is long-standing Russian/Soviet policy to expand your borders as far as possible to both deny the enemy resources and have a “buffer zone” in case of attack.

That’s what the “Iron Curtain” was about. That’s why they propped up regimes around the world to keep us busy. That was the reasoning behind their depth-defense in their military organization and tactics.

I could be wrong.

Wouldn’t be the first time.

So far Putin has been playing the long game expertly.

Time will be the judge.