It’s odd really. A couple weeks ago we were told there were only a “handful of Russian advisors with antiquated weapons” on the ground in Syria. Now they are an “invasion force with the most modern weapons.”

So which is it?

The reality is that the Russians are a bit of both. They do have their lack of funding and their limits. They do still have lots of rusting submarines and seriously horrible pay.

On the other hand, they HAVE invested quite heavily in their military in key areas… just different areas than we have.

For example, they invest little in stealth but much in jamming, low band radars and IR tracking systems. They can DETECT stealth pretty good. And pretty cheaply.

In other words, fairly cost effectively.

Our Pentagon spends a lot of money on whiz bang weapons. We get a lot of bang…but it’s also a lot of bucks. (Quite a few expensive flops along the way but that’s another story.)

Did the Russians launch 30, then “omit” the four that missed, hoping we wouldn’t notice since they crashed in Iran? Did they launch 26 and say “all 26 hit”, then not know 4 crashed in Iran? Either way, that’s well over 80% accuracy… if they “hit their targets.”

That’s comparable to our Tomahawk cruise missiles at similar ranges. Also that’s trusting OUR media on how well we “hit the targets.” I can’t verify EITHER claim to be honest, so hey why not? Cruise missile technology is actually pretty simple navigation and I dunno who to trust on what “hitting a target” means anymore.

Was it “success” blowing up that hospital? We were told it was full of Taliban. Was it?

Did the Russians trust the Syrians that their missiles hit ISIS or Rebels? Did they? How well? *shrugs* So, bottom line is that I’d believe their cruise missiles were proven workable. The technology is decades old at this point. The important point isn’t the military technology. It’s the diplomatic EFFECT of the strike remember!

Anyway, we have to measure the Russian forces in Syria as THEY do. They aren’t an invading force or a conquering force. They aren’t meant to take ground. They don’t want a huge footprint.

The Russians want to be center stage POLITICALLY. That is what Putin craves. That is how you “win the peace” later.

The Russians are playing a diplomatic game, not a military one so much. The Syrians have allies. They have Iranian troops, Hezbollah, Shi’a “volunteer militias” as well as the Syrian Army.

Heck, even the Kurds aren’t opposed to Russia getting involved. Remember that while the Kurds have been attacking ISIS, our “ally” Turkey has been BOMBING THE KURDS! Yes, that helps ISIS but Turkey has been…. well not quite an “ally” of ISIS I suppose but the supplies and recruits for ISIS are coming THROUGH TURKEY so come to your own conclusions. 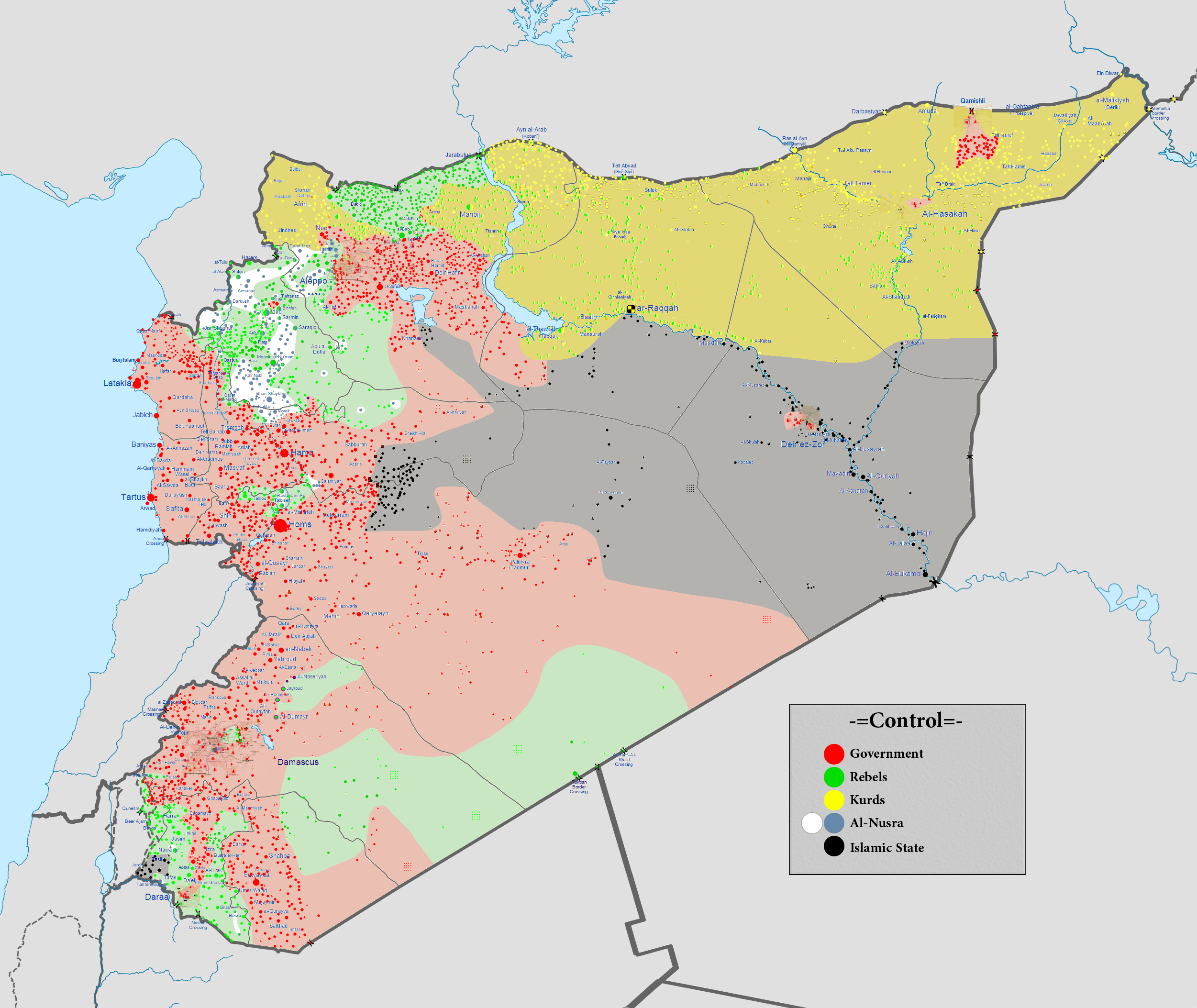 See the Kurds up there by Turkey? See the gap between the Western Kurds and the Eastern Kurds? That’s where Kobani is… THAT is where the Turks are blowing them up mostly. As you can see, ISIS can’t get supplies from the south (Jordan), or the east (Iraq) or the west (Syrian Government and Rebels are fighting there.) So, they have to funnel their supplies from Turkey through that neck of “gray” down into ISIS lands.

But hey, Turkey says they’re on our side so… hey if that’s good enough for our President to trust them….

The Russians have little love for the Turks. The Russians have already been accused by the Turks of “violating Turkish airspace” twice. I’m not sure HOW since the Russians don’t have Mig-29s in Syria (which Turkey says they saw in their airspace), but hey…whatever.

The point is that just the THREAT of Russian warplanes in the air has caused Turkey to mostly stop bombing the Kurds. They don’t want to “accidentally” bump into each other. So, Turkey (our “ally”)  has been prevented from blowing the hell out of our real allies, the Kurds.

Big picture here is that Russia has allied Syria, Iraq, Iran and a TON of subgroups into a coalition to fight ISIS. And keep Assad in power yes, but since ONLY Obama seems to care about that… the rest of them are cool with it. They are willing to live and let live as long as they get to wipe out ISIS.

The Russians have even established a “Coalition Intelligence Center” in Baghdad that we aren’t allowed inside of. They come out and tell us what we need to know… like when the General came out and said “In 1 hour we will bomb ISIS. Please don’t come near us. K THX BAI.”

The Russians are indeed as the saying goes “playing chess while we play checkers.” It is a habit with Russians, but also a reflection of the ineptitude of this Administration. It doesn’t help Putin has decades of experience with this stuff from the KGB.

I’ve gone into before how our (well… our “leaders”) caused this whole mess through the “Arab Spring” fiasco before. I don’t need to go through it again. Suffice it to say that we screwed it all up and the Russians are taking FULL advantage of it.

Anyway, you can tell a LOT about the Russian plans by their latest cruise missile strike. People are blowing it off. The Russians are NOT “just lobbing a few missiles.” They are making a political statement.

Why do I say that?

First, they didn’t NEED to do it. They CHOSE to try something new. When people started scoffing at their low-level strafing and “dumb bomb” attacks, the Russians just laughed. Why spend $50,000 to $2 million on a bunch of guys in tents or a pickup truck?

The Russian tactics really haven’t changed all that much since World War II. Fortunately, neither have the targets. ISIS (and the Rebels) have crappy anti-aircraft. And, they’re a bunch of guys with rifles. So, low tech works just fine.

So, they didn’t NEED to use cruise missiles. They WANTED to do it. Why?

That leads to the second reason.

Not Russia itself mind you, but close. Check out this map.

See that little bit of land just to the left of where it says “Middle East?”

Just a few hundred miles away. Seriously, maybe 700 miles or so to Syrian targets. Putin COULD strike from Russia it’s that close.

He is making a point here. He’s saying “This is in MY back yard!” He uses our “expeditionary” weapon, the cruise missile and launches it from off the coast of Russia…basically.

The reason he launched it from ships is because A) the missiles are ON ships, and B) it would be a long way to go around Turkey from the north side. So, why not fire from the Caspian Sea?

Either way he’s making a very clear political point. It’s similar to the Cuban Missile Crisis honestly. Back then the US had nuclear missiles in Turkey aimed at Russia. Pretty close, right?

The message is the same here “Stay out of my back yard. You aren’t welcome here.”

Third, to expand on this point he chose the Caspian Sea because it borders Iran. He COULD have sent ships out into the Mediterranean to the west and fired from there. Heck, there are Russian ships IN Syrian ports already (Tartarus.)

He chose the Caspian Sea to make sure to fly over Iran and Iraq on the way to Syria. They are now ALLIES and they agreed to it beforehand. This is a way to stick to Turkey… and NATO… and the USA… saying “Fine, we will go around you. We don’t need you to take the fight to ISIS.” (Or the anti-Syrian Rebels…etc)

Fourth, Putin make a point to say to his military advisor on TV “Keep working with the Americans on coordinating our strikes.” He didn’t make a speech. He just slipped it in casually as if it were an afterthought.

This man is the master of public relations. While our Administration is screaming at them to stop and leave, he is acting like we’re all friends working together. He is making us involuntarily allies!

Militarily, the Russians may or may not be “doing more damage to ISIS than we have in the past 13 months.” Who knows? Reliable sources on the ground are few.

However, the Regime seems to be advancing. Not sure if it’s the planeloads of fresh ammunition, the bolstering of morale or airstrikes. Maybe a little of all of the above?

Point is it’s working. The Russians are really getting success on the cheap. They are making a HUGE political statement and risking VERY LITTLE in the process.

Even their “massive troop movement” is a battalion of Marines. A battalion is not a lot. It’s about 500-600 troops. That’s about what you’d need to protect an airbase to launch planes from.

We would call it “force protection.” Lots of troops to do guard duty and drive around the base to watch for saboteurs and such. Hardly an “invasion.”

Besides, as the Russians keep throwing in our face they ARE the ones that were INVITED. We could have been invited into Syria too, but Obama insisted that “ASSAD HAS TO GO!” So, we barged in and started blowing stuff up.

Then again, there would be no “Syrian Civil War” and no “ISIS” without the Arab Spring uprisings our State Department started… so I guess it makes sense that Obama wasn’t keen on STOPPING the chaos that he’d just STARTED.

Where’s the fun in that?

Unfortunately, you can’t win the game unless you know how to play it.

Netherlands Builds First Solar Road! »
« The Vatican does NOT own Beretta Guns nor is this “news”