Barring some far our “replications” like on Star Trek or something, if we do go to other planets in the future what would we eat? To a certain extent on short trips you can take it with you, but not for longer periods. Eventually you are going to have to get food from where you are.

Yes, there is the option of simply building greenhouses for existing plants we bring from Earth. I’m hoping the universe has a surprise in store for us, however. I’m hoping for ALIENS!

Why not? It’s my future dream. Going all that way and finding just more empty rocks is kind of depressing. It may be likely we won’t find anything. It may be smart to make a city on Mars just in case Earth has a fatal meeting with an asteroid or something.

So, if we do find aliens what would we eat when visiting? What would they eat?

Some aliens might be able to eat the same food as us. There’s that whole Star Trek theory where we run into a bunch of humanoids in different colors basically 99% like us.

I think it’s more likely we run across a slime mold or a rock monster or something. It would definitely complicate things. 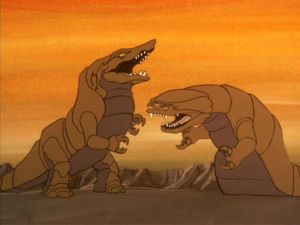 I’ve found that when travelling as an American I tend to look forward to a good McDonald’s in a foreign country.

It’s not that I don’t try the local food. It’s not that McDonald’s there is any better than here. (Often quite the opposite!)

Or a Space Diner? 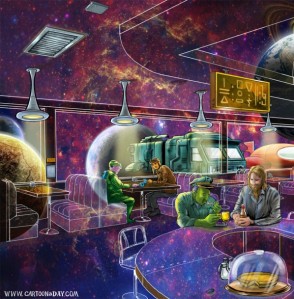 I bet the aliens would have something similar. No clue what they’d eat, but I’m sure even the rock monsters might have some familiar “favorite” from back home… a good chunk of granite with quartz flakes or something.

If they’re anything like us, I’m gonna guess most intelligent life has quite a bit in common. If they get to the space exploring level, they have to have some sort of society, some social standards, a common language, etc.

Maybe we have more in common than we think.

Overexposed and Overreactive »
« Hope For the Best, Plan for the Worst