Hope Floats- The Return of the Great White Fleet?

Amidst increasing calls for MILITARY support to help fight Ebola in Africa, let’s slow our roll a minute. What exactly would more troops do to help things? Do we need to really put “boots on the ground” in another country? There’s plenty of armed people in the countries of West Africa already. Somehow I think putting our soldiers there is going to help much.

That’s especially true since they’re not doctors. They’re trigger pullers. They make wounds, not fix them.

Even our medics and doctors aren’t for fighting EBOLA. They specialize in gunshot wounds and taking shrapnel out of people. They’re not trained in infectious diseases and hazmat suits, etc.

We really shouldn’t get involved there directly. Not only is it practically more harm than good (what’s to stop those soldiers from getting Ebola too?) It is symbolically seen around the world as just more Americans “invading” another country with gun toting troops.

Then I thought about it. We COULD always send our hospital ships. We have ships like the USNS Comfort. It’s a hospital ship that’s been in service since 1975. 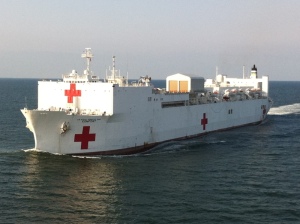 It’s not a “Navy” ship per se. The Navy owns it, but it’s crewed by civilians (doctors, crew, etc) and Defense Dept personnel. It’s not armed and isn’t a NAVY ship though (hence the USNS, not USS.)

Okay so there’s only two of them and they have been REALLY busy as it is. But, this would be a PERFECT opportunity to EXPAND that fleet. Since it’s not NAVY, we could use other budgets to build some more. Hell, we could even ask the United Nations for money to build some. (About time we got some of those BILLIONS back we donate every year.)

In fact, it could even go beyond that. If you remember your history, back in 1907 President Teddy Roosevelt initiated a naval exercise called the Cruise of the 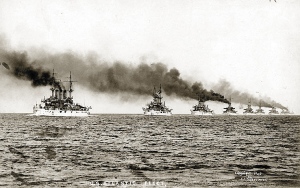 Back then it was about intimidation. They were the newest battleships in the world and we were flexing our muscles. It was a massive show of force.

However, we want to do the opposite now. We want to show we’re a force for GOOD. So, why not build a new “Great White Fleet” of unarmed PEACEFUL ships for DISASTER RELIEF MISSIONS?

We already have everything we need. We have cruise ships we could buy or build for hospitals. We have old helicopter carriers we’re breaking up for scraps as “extra”.. or buy more. We have some extra tankers and cargo ships we could take out of the Naval Reserve “mothballs” storage.

If we manned them with civilian crews and painted them white with big red crosses, they would make a GREAT example of all the GOOD we could do in the world. We could be involved in helping around the world without seeming to be MILITARILY involved. It’d also be a great chance for people who want to help but don’t want into the armed forces to help out.

It could even be quite internationally staffed. Any country would be allowed to send volunteer doctors and crew to apply to serve on the ships. They wouldn’t be just medical either. Construction crews and equipment for debris removal for tsunamis or earthquakes, communications gear to rebuild temporary cell phone networks, helicopters for medevac and transportaton, fuel for hospital generators plus food, water, clothing… all pre-packed on board and waiting to sail anywhere in the world!

They could even have their own fundraising channels. You could donate to a specific ship or the “Great White Fleet” and know it was going to a good cause. Think about the legacy a President would have building such a powerful FLEET FOR PEACE!

I Heard It Through the Pipelune »
« Boom!

5 thoughts on “Hope Floats- The Return of the Great White Fleet?”