Too many “r”s? I never know because I wanna show how pro-feminist I am and at the same time dehumanise women by making them into animals. Or at least that’s what I imagine whoever came up with that “grrl power” thing was thinking.

I know there’s often a big hue and cry over the lack of female role models in movies, literature and video games. 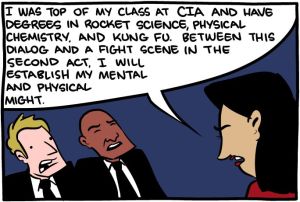 (not sure where this comic is from. Found it on an internet search. If anyone knows, it looks like an interesting one to read.)

Well, here’s one list (of many) of female characters I ran across that seems quite extensive.

I’m not sold on the whole idea that kids identify as much with gender as we give them credit for. If that were the case Sesame Street and Disney would both fail miserably. How many female monsters are there? (And are we even sure they ARE male or female? I’m not checking!)

Meanwhile, there’s very few Disney movie that features a likable male character. Well, a human one that is. I guess the Donkey from Shrek or the Candlestick from Beauty and the Beast would be “male” and eventually human.

Generally they’re pretty patriarchal, petty, greedy and vain. On top of that, they’re generally clumsy, dimwitted and unimaginative. Much like the male hero used to come and “save” the princes… the female hero now always has to “save” the prince… if there even is one.

Not exactly a great number of role models for young boys to choose from. My one friend’s boy likes to watch “My Little Ponies” and the other likes to pretend to be the “older brother” of the female characters in Disney movies to adapt the role so it fit.

Kids are like that. They make things up. (Hell, all through grade school our teachers swore there was a third brother in my family. They kept saying “no, the OTHER one.” Still not sure what that was about.)

So, I’m not sold on the idea that kids ONLY bond with their own gender characters. I’m not even sold on the fact that you need a “feminism” movement at all since if men and women are equal that’s called “Equality.”

It already has a name. Why create another one? “Equal Rights” weren’t good enough?

Still, if that’s your thing here’s a list of video games with female protagonists.