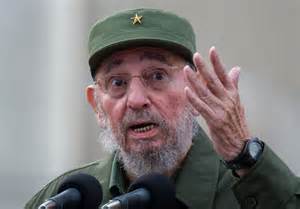 They talk about the failure of socialism but where is the success of capitalism in Africa, Asia and Latin America?” – Fidel Castro
It’s odd that people can so often miss the forest for the trees. I’ve heard ad nauseum how much “Capitalism doesn’t work.”
Really?
So you did NOT just go to the mall and buy 17 different things in 9 different stores? How do you think that the MILLIONS if not BILLIONS of dollars worth of products got into those stores? Magic?
Did the government decide what each of those stores stocked? What it sold everything for? Who to hire? What hours to be open? What color to paint the walls? Where to build their stores or even if to exist at all?
No, “Capitalism” did. A “Free Market” is just YOU and lots of your neighbors making choices every day. You choose where to get gas. You choose what to have for dinner. You choose where to buy it. You choose whether to buy something on sale or not.
It’s all YOU. Do you think ANY level of government, even in a Democracy is anywhere NEAR as fair and equal as that? My dollar is worth the same as your dollar. They both spend the same.
Capitalism is by its very nature FAIR. It HAS to be. That’s how the system WORKS.
Furthermore, it has to be responsive to YOU. Your town council can blow you off for weeks on fixing that pothole by your house. What do they care? You might get to vote for them once a year at most… IF you vote.
Sure, you MIGHT show up for a monthly town hall meeting. Maybe. For five minutes to speak. Or you might write a nasty letter.
Big deal.
If you don’t like the supermarket’s prices you take your money somewhere else. Today. this INSTANT.
Immediately that’s hundreds of dollars out of their pockets. If it continues, they go broke. They CEASE TO EXIST.
THAT’S POWER!
What’s more, that’s RESPONSIBLE POWER.
They answer to their customers or financially die. Sometimes literally!
I don’t understand why people can’t see the GREAT thing they have. You have a huge system that WORKS and it’s not controlled by any ONE person. You don’t have a “President of the World Economy.” You have company bosses, but they still answer to YOU as customers. They also answer to competitors.
How amazing is that? It’s a VERY efficient system that runs on its own without having to “tweak” it constantly and “study” things. It just WORKS.
It’s a working system that regulates itself more effectively than any individual or group of individuals could because it already IS. YOU are the regulator. You, your family, your neighbor… ALL OF US are regulators.
We keep them honest. If they cheat us, we bitch loudly and they lose business. You can get away with it once (maybe) but you can’t make a business out of fraud and bad service. People catch on and they punish that company. The company then changes or dies.
Why would anyone want an inefficient, corrupt, lethargic and unresponsible system like governments have? They’re useful for BIG things… nation-wide services such as printing money or maintaining a military (with lots of oversight and vigilance by the people) but they just don’t do much very well.
What do we NEED government for/ To make sure the market has a framework to operate within. There is a minimum that needs to exist to make the market work.
Having things like a court system, some basic laws (rules really), some security and ways to settle disputes peacefully are about it. Perhaps some highways and infrastructure but even then that can be created by the market as needed.
It’s akin to providing water for the fish. You don’t need to make every choice for every fish in the ocean. You just put the water there and they do what they want.
Fishermen get that. Setting up a fish tank is hard balancing the PH levels, temperature, food, etc. Fish in Lake Ontario just.. LIVE. No one has to sit there and monitor everything. It’s much EASIER.
Farmers know this too. You don’t TELL a plant how to grow. You don’t micromanage corn. You simply provide the seeds with good soil, sunlight and rain. The corn does the rest!
The farmer in this case is government. The most important thing the farmer does at this point is to keep parasites off the corn while it’s growing. Markets have parasites too that seek to profit from other peoples’ work.
Going back to the quote above, THAT is what hampers parts of Africa, Asia and Latin America. They don’t lack GOVERNMENT. What they have of government is often too much and doesn’t do what it’s SUPPOSED to do.
If you don’t have a working court system, a military, some police and a way to communicate… who wants to do business there? Why would any business build a factory if tomorrow the corrupt politicians could come in and take it at gunpoint? Or why dig diamonds if a gang can come in and steal your monthly production…at gunpoint?
Where those basic needs are MET and there is Capitalism… the people THRIVE! Singapore, South Korea, Japan, Hong Kong… all in Asia.
Burma isn’t poor because of Capitalism. It’s poor because it doesn’t know what it needs to do to provide an environment for the markets to thrive.
My favorite example of this thinking is in the movie “Idiocracy”, about a world where smart people have been breeded out of the population of a future America. The script writers were either brilliant or accidentally wise. The crops are all dying because of being fed a “Gatorade”-like sports beverage in place of water…because it’s “Better than water!”
Is it?
Try Putting Water on the Plants???

Mission “Impossible” »
« The Book of Christ According to Marx