So this is apparently a real thing now. 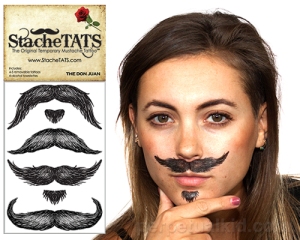 I saw them in the convenience store today. I though it was a joke. No, they’re real.

I can’t for the life of me understand why anyone would buy these. I’m hip to the power of a well trimmed moustache. I’d ALMOST buy that it’s some sort of feminist empowerment thing.

But no, it’s apparently just “fashionable.”Oh for the love of God, WHY?

I went to the source.

Apparently these ARE popular because they now come in 140 different styles.

ONE HUNDRED AND FORTY DIFFERENT STYLES OF TEMPORARY MOUSTACHE TATTOOS!

(just a small part of the huge selection)

I can’t figure out why anyone would want ONE.. let alone that many!

May God have mercy on my soul, but I HAD to see what else was on offer. That, and I have a sadistic streak reserved only for those who park in handicapped spaces and the NSA spooks who might go through my internet history.

Go ahead. I dare you. TRY to make sense of it! Muahahahaha!

I can see them scratching their heads in frustration now.

I hope I get a really cool sponsorship from them for all this free advertising. All five of my subscribers might buy up to zero stachetats. I can’t even admit I’d buy one.

Quite honestly my own moustache is quite glorious at this point. It’s no Ron Swanson, but it’s good enough for me.

So WHO you ask, is the target audience? From what I can figure it’s women, children and girly men who can’t grow a moustache. Oh, and fans of losing sports teams that are hiding from shame.

Seriously??? Who ADVERTISES they’re a Buffalo Sabres fan? They’re the WORST IN THE LEAGUE! When you lose 3/4 of the games you play I can see a reason to hide. That is possibly the worst attempt at hiding in shame I’ve ever seen.

Sure you’ll look like an idiot, but not a LOSER. There’s only one thing that stinks worse than the Sabres and that’s…

Who the hell wants THAT under your nose? It’s like having armpit shoved right up your nose. Uh oh… I think I’ve just given stachetats a new marketing idea.

I’ll be happy with a small 20% royalty on those. No big deal. I’m not greedy.

One thought on “Stachetats Sweep the Nation”